This duo of Snarks bring you for the One Hundred and Fiftieth times a show of geek messary, they speak on the reactions from the Batman V Superman screening, anticipation for the DC movies, Fantastic Four's critic reactions for the movie, They react to the Deadpool trailer, Gambit movie update, Marvel Phase 3, Captain America: Civil War teams released, Who's side are the Snarks on?, Wally West casting for Flash tv show, Then  plethora of comic reviews, including Archie #1,Star Trek/ Green Lantern: The Spectrum War, Godzilla in Hell #1, Transference from Black Mask, The Divine from First Second, and in an effort to redeem John, They once again review They Stand on Guard #1 from Image,    and the Sorry-List! .... you really have to listen to the whole show! 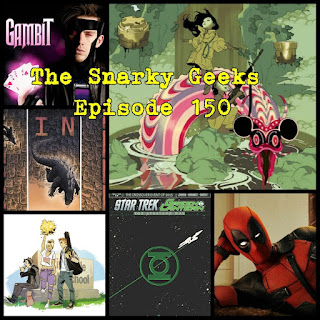 Posted by The Snarky Geeks at 2:09 PM