These two Snarks bring their 4th year to a start!, They talk on the Star Wars Collectors box and anticipate the spending of their monies!, the Jessica Jones teaser trailer discussed, The anticipation of anal sex in the Marvel Cinematic Universe is very high, Hawk Girl and Hawk Man pic is poured over, Mary Jane pulls on Tony's Tiger,  the event fatigue myth, Dark Knight III variant covers, Batman's screen time in BvS is debated, Give Superman a chance!, Anticipation for WWE 2K16 video game, Then they drop some reviews on Ed Piskor's Hip Hop Family Tree series, and Dark Corridor from Image Comics,  and much more  ,    and the Sorry-List! .... you really have to listen to the whole show! 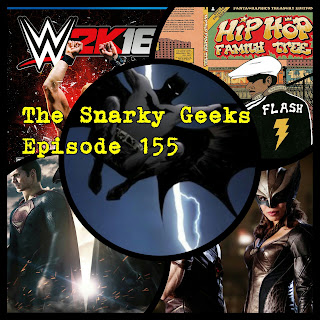 Posted by The Snarky Geeks at 4:39 PM