The 200th episode! The Snarks bring you pontifications on the WWE Draft and brand extension NXT call ups, Finn Balor,  Alexa Bliss, they go over some trailers released during SDCC, Justice League, Wonder Woman, Suicide Squad, JL Action, Marvel Netflix, Agents of Shield, Ghost Rider,  an unboxing of a Star Wars crate, and more . , Plus the Sorry-List! Thanks to anyone who gave or gives this mess of a show a listen! ....  you really gotta listen to the whole show!, 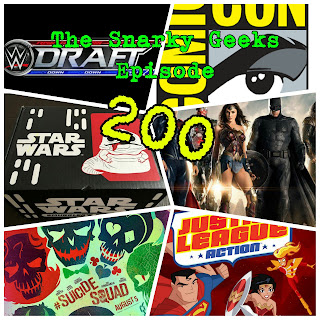 Posted by The Snarky Geeks at 3:54 PM